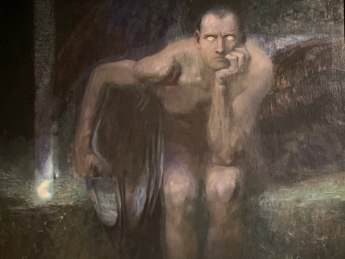 Hell described by Dante Alighieri in the ‘Divine Comedy’, of course; but also hell on earth between wars and persecutions, alienating jobs in mines and factories; and our interior hells iconographically represented by imprisonments in prisons and asylums: ‘Inferno’ is the exhibition that opens tomorrow in Rome, at the Scuderie del Quirinale, curated by the French art historian Jean Clair and presented alongside his wife and collaborator Laura Bossi and Mario De Simoni and Matteo Lafranconi, respectively president and director of the exhibition space on the Quirinale hill. The exhibition – 232 works by 87 lenders from 15 countries, “to testify the universality of Dante’s greatness”, as De Simoni points out – analyzes Hell in all its dimensions, obviously starting from the literary dimension of the ‘Divina Commedi ‘a, closing the celebrations for the 700th anniversary of Dante’s death in 1321; and continuing with the pictorial currents, with religious references, with philosophical and psychological theses, up to the developments on social conditions. However, starting from the art of cinema, with the screening at the opening of the exhibition of the silent film of 1911 entitled ‘Inferno’, the visitor then finds himself in front of the Gate of Hell sculpted by Auguste Rodin and then reflects on the origins of this’ dimension ‘through the painting of the’ Fall of the Rebel Angels’ by Andrea Commodi; and on the consequences, admiring the ‘Final Judgment’ by Beato Angelico of 1425 or reading some pages of the illuminated manuscript ‘The City of God’ by Sant’Agostino, and then being kidnapped by Botticelli’s ‘Voragine Infernale’ of 1488 on parchment, loaned from the Vatican Apostolic Library. Dante’s journey, accompanied by Virgil into the underworld, is described by several paintings as well as by Gustave Doré’s illustrations of 1861. Leaving the ‘Divine Comedy’ one enters other diabolical representations, such as those contained in the Sicilian theater of the Opera dei Pupi with the typical puppets of the Palermo and Catania tradition to represent a hell steeped in magic and superstitions, folk tales and dreamlike visions. Several paintings represent the Devil in all his meanings, from Satan to Lucifer up to the more theatrical Mephistopheles. Realistic as well as disturbing, then, the canvases to depict ‘our’ earthly hells: work in mines and factories, the consequences devastating wars, imprisonments in prisons and asylums, the ‘absolute evil’ of the Nazi extermination camps. But as in Dante’s journey, one comes out of Hell ‘to see the stars again’ thanks to the spectacular images taken by NASA’s Hubble Utra Deep Field telescope. All contained in the voluminous catalog published by Electa for the Scuderie del Quirinale. (by Enzo Bonaiuto)

Pippo Baudo: “Images of misfortune from my Catania city of the sun drowned in water”

Who copied the Reggaetonno? Dispute of plagiarism to the Zecchino d’Oro