Edoardo Erba: “My theatrical text for ‘Muratori’ from the Roman dialect now passes to the Neapolitan” 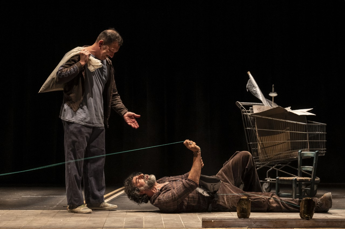 It was born in Italian, grew up in Roman dialect and now passes, without getting old, to the Neapolitan. It is the linguistic history of the text for ‘Muratori’ written by Edoardo Erba, which will be staged from 19 to 24 October at the Sala Umberto in Rome – starring Massimo De Matteo, Francesco Procopio and Angela De Matteo directed by Peppe Miale – for the first time in Neapolitan version, after having also known a Friulian one. The writer says: “The text of ‘Muratori’ was born in Italian and it seemed so beautiful to me; but the theatrical critic Franco Quadri read it and told me that the text was excellent but the language was wrong, it made the characters not very credible and yes better suited a dialect or at least a strong regional cadence. Thus was born ‘Muratori’ in Roman dialect, the result of a meticulous work by the group that would later stage it, formed by me with Massimo Venturiello, Nicola Pistoia and Paolo Triestino. The Roman edition was a success that lasted for sixteen consecutive seasons. Once this version was exhausted, today ‘Muratori’ restarts from the Neapolitan dialect “. For the director Peppe Miale,” the text by Edoardo Erba navigates between luxuriant horizons of concrete and refined comedy and small and surprising stops in waters that call for an acute reflection on the human condition. And if in our reading, the rhetoric could represent an easy stumbling block, let’s try to denounce that the pandemic moment in place forces a crisis of culture, of which the theater is only among the highest representations, it is also true that the author already in 2002 signaled to us that there were those who wanted culture to be ‘walled’ in a supermarket and it is therefore always our task to try humbly so that the walls do not replace the curtains “. The theme of Edoardo Erba’s comedy is very current, especially in this period that has seen many theatrical halls no longer reopen after the pandemic of Covid: the crisis of increasingly sacrificed theaters to make room for more lucrative supermarkets. The story unfolds through hilarious comic exchanges and moments of profound reflection, for a story of friendship and revenge, also steeped in social conflicts, which is intended to be a declared hymn of love for the theater. bricklayers are working to close the stage of a disused theater with a wall: the area has been sold to the neighboring supermarket which is to expand the warehouse; it is a building abuse and you have to work quickly, to finish the job before the day comes.But the theater is a magical place and profaning it means unleashing hidden, irrational presences, capable of provoking strong emotions in the hearts of the two unsuspecting laborers, until the meeting with an enigmatic and sensual Miss Giulia who will upset their destiny and that of the theater itself. (by Enzo Bonaiuto)

Introspective journey between mystery and adrenaline, is ‘Don’t do good’ by Andrea Bartolucci

Fiorella Mannoia, ‘my version on Rai3, between lightness and reflection but without quotas’

Baldwin shoots on set: “There are no words to express my shock”

One thought on “Edoardo Erba: “My theatrical text for ‘Muratori’ from the Roman dialect now passes to the Neapolitan””