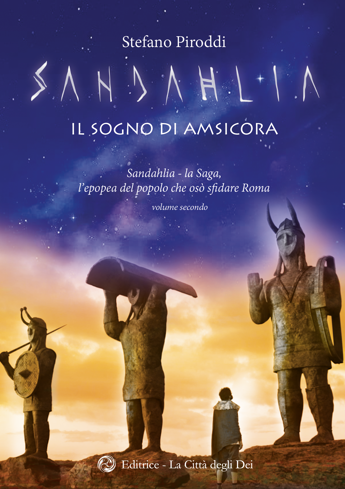 After ‘The two faces of the soul’, ‘The dream of Amsicora’ comes out, the second volume of the literary project ‘The saga of Sandahlia’ created by Stefano Piroddi, Sardinian writer from Cagliari, 45, published by La città degli Dei, casa publisher founded by himself in 2014, dedicated to the history and myths of the ancient Sardinian people, which will end with the volume ‘The legacy of the dreamy Absolute’ at the end of the trilogy, being developed by the author. The saga wants to open a suggestive window on the pre-Christian era, “when the Sardinians had found a perfect balance between man, nature and the cosmos, in which the woman was the central figure, as a natural living representation of the feminine principle of the cosmos, or – explains the author – that set of imagination, creative madness, magic and mystical spirituality that permeated every aspect of the world and of life and that allowed their preservation in harmony “. The war against the Empire of Rome,” the bearer of a strongly bureaucratic and leveling imperial vision “, was inevitable at that point, lasted for centuries and unfolded with hardness and ferocity in eleven great conflicts, even if in the end” the Sardinians were the only people in the Mediterranean not to be militarily defeated nor culturally dominated “, underlines Piroddi. This clash of civilizations, “the greatest in the ancient world”, is the real great protagonist of the ‘Sandahlia Saga’. The literary project signed by Stefano Piroddi is preparing to go international, through the next English translation of the first book of the trilogy , ‘Sandahlia – The two faces of the soul’. In addition, the saga also ranges in the illustration sector through the graphic novel ‘A Dance of Love and Death’ and provides for further developments in the theatrical and film sector, managed by the film and artistic production company Armeni Ges Productions. (By Enzo Bonaiuto)