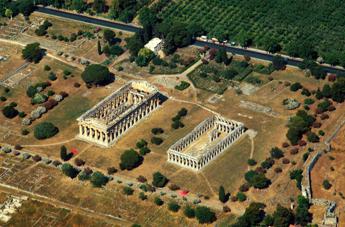 The “International Archaeological Discovery Award” Khaled al-Asaad “was awarded to Zahi Hawass, director of the Archaeological Mission, for the discovery of the” golden city “founded by Amenhotep III, which emerged from the desert near Luxor in Egypt. of the XXIV Mediterranean Exchange of Archaeological Tourism which takes place in Paestum (SA) until tomorrow, at the Next (New Ex Tobacco Factory), the Basilica, the archaeological area and the National Museum. Hawass, general secretary of the Supreme Council of Egyptian Antiquities, is also known for his numerous popular appearances in documentaries on ancient Egyptian civilization. By analyzing the DNA of some Egyptian mummies, he reconstructed the genealogy of Tutankhamun and by analyzing the body he confirmed the hypothesis of the accidental death of the sovereign. Hawass also identified Queen Hatshepsut’s mummy. Since January 2011 he has been appointed Minister of Antiquities of Egypt. The Salone hosts 150 exhibitors including 17 regional territories, 12 Regions, (Roma Capitale with the Municipality X and the Ministry of Culture with 500 square meters dedicated to autonomous parks and museums, from the Colosseum to Paestum and Velia, from Sibari to Campi Flegrei, from the National Archaeological Museum of Naples (MANN) to the National Archaeological Museum of Reggio Calabria) and 20 foreign countries (including for the first time Saudi Arabia, Lebanon, Palestine and Greek Macedonia). presents the candidacy of the Via Appia Antica for inclusion in the Unesco World Heritage List, in its integral path from Rome to Brindisi which develops almost entirely in Southern Italy. The candidacy proposal involves 4 Regions, 74 Municipalities, 14 Parks, 13 between Metropolitan Cities and Provinces, 14 Parks, 25 Universities, 28 offices of the same Mic, who have joined together to protect, enhance and promote the candidacy of this ancient path communication axis, the first conceived as “via publica” and which was the prototype of the entire Roman road system. 500 speakers engaged. The main initiatives also include the Conference with the Directors of the Autonomous State Parks and Museums. The Exchange also hosts the presentation of “e-Archeo”, a large national project for the multimedia and technological enhancement of 8 archaeological sites: Egnazia (Puglia), Sibari (Calabria), Velia (Campania), Nora (Sardinia), Alba Fucens ( Abruzzo), Cerveteri (Lazio), Marzabotto (Emilia Romagna) and the Villas of Sirmione and Desenzano (Lombardy), born from the synergy between several Italian universities and the CNR ISP. In collaboration with the Institute of Cultural Heritage Sciences of the CNR, the ArcheoVirtual exhibition, the flagship of the Stock Exchange for 15 years, illustrates the most significant productions in the field of digital technologies at the service of Heritage. The 2022 edition, “Towards the Metaverse”, intends to introduce the public to the prospects that are delineate in the field of new immersive environments and virtual worlds. Also highlighted are the ArcheoExperience sections, with the Experimental Archeology Laboratories on the techniques of realization of everyday artefacts, ArcheoLavoro, orient post-diploma and post-graduate update by the Universities, involving 2,500 students and 200 teachers, and ArcheoStartup for the presentation of youth cultural tourism businesses, in collaboration with the Startup Tourism Association.