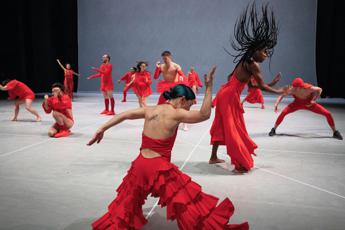 Flemish choreographer, internationally recognized as one of the protagonists of contemporary dance, Jan Martens returns to Romaeuropa on 28 and 29 September at the Auditorium Parco della Musica Ennio Morricone with ‘Any attempt will end in crushed bodies and shattered bones’, a hymn to rebellion, to civil disobedience, to resistance, to the march towards progress. Appropriating the languages ​​that characterize the extreme polarizations of our days, Martens brings to the stage a miniature society, a heterogeneous group of performers, professionals and non-professionals between 16 and 69 years of age who claim their voice within dance. “In times of extreme polarization, this group pushes aside social dogmas to recognize and embrace a range of distinct identities. Be uninhibitedly themselves, in life and in art, with the stage as an ideological test bed,” he says. the choreographer. With a headline that explicitly refers to the brutal statement by Chinese President Xi Jinping at the protests in Hong Kong (‘Every attempt will end in crushed bodies and shattered bones’), Martens’ work looks at the global wave of revolt of the latter. years, from Black Lives Matter to the marches of young activists for climate change, and makes his own protest music from Max Roach’s Abbey Lincoln to Lauryn Hill to Górecki’s Concerto for Harpsichord and String Orchestra, passing through Kae Tempest. Aesthetically rigorous, minimal, geometric and despite this incurably romantic, the choreographer continues his exploration of the human soul by directing his gaze to the size of the crowd.

1 thought on “Dance, the revolts of the Black Lives Matter, staged at ReF Jan Martens”