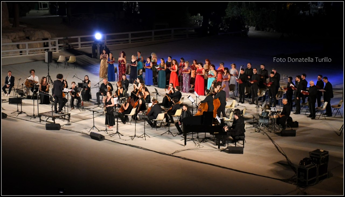 Greeted by a real triumph for the inauguration of the 2022 edition of the Opera Festival of the Stone Theaters, this evocative work of contamination between pop and lyric dedicated to Franco Battiato and Lucio Dalla also arrives at Mandanici, next October 1st at 9pm. The Opera Festival of the Stone Theaters continues in this real work of innovation by dedicating the opening gala to the sublime melodies created by the two great artists whose history is inextricably linked to Sicily and which will be reinterpreted in a singular acoustic key from the resonances they make. echo to classical, popular and pop thanks to the compositions of Ruben Micieli and Corrado Neri, two of the youngest and most talented concert pianists that Sicily expresses today at an international level. A rich musical marathon that will take place in the main Theater of the City of Longano with a program focused on the most famous, but also more intimate and spiritual musical production of Battiato and Dalla: Nevskij Prospect, Signs of Life, The animal, Parallel Streets, Testament, Poor homeland, The shadow of light, The era of the white boar, Stranizza d’amuri, White flag, Cucurucù, The Care, Permanent center of gravity, I want to see you dance will be the songs to pay homage to the mystical and universal art of the famous Etnean singer-songwriter; 4/3/1943, Canzone, Anna and Marco, Caruso, Attenti al Lupo, Piazza grande, The coming year, How deep is the sea, Futura, Tu never enough for me will be, however, the soundtracks with which the genius Dalla has imprinted his memory in the eternal history of the song. “A large parterre of voices will interpret, under the direction of Francesco Costa with the Sicilian Lyric Choir and the orchestral ensemble in residence of the Calabrian Philharmonic Orchestra, some the most famous pages of the well-known composers: Rita Botto, Federica Contarino, Martina Cundari, Alessandro Faro, Martina Isaia, Alberto Munafó Siragusa, Federico Parisi, Costanza Paternò, Giuseppe Santangelo. A magnificent season opening is therefore being prepared for the Mandanici Theater , under the artistic direction of Alberto Munafò Siragusa, which is a prelude, as already happened in the previous season, to a rich and varied program, which will certainly attract a heterogeneous audience, coming from the entire regional territory “.

1 thought on “Sicily, Battiato & Dalla Tribute at the Mandanici Theater in Barcelona”