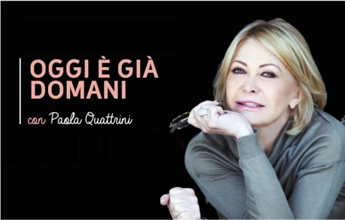 “Resuming theater with the public in attendance meant great happiness and great emotion, together with a great energy and a sense of great responsibility. But I had a great desire to start over and be close to my audience again”. This is what the actress Paola Quattrini confesses to AdnKronos, engaged at the Manzoni theater in Rome until May 23 with the comedy ‘Today is already tomorrow’ by Willy Russell where she is on stage alone – “but it is a real show in two acts, not a simple monologue “, he warns – taking up the historical direction of Pietro Garinei, his last,” and I always feel him next to me “, assures the actress. “I have to thank the artistic director Pietro Longhi, for the courage he had in deciding to reopen the theater – underlines Quattrini – Unfortunately, there is still some concern and difficulty on the part of the public, after such a long period of forced closure; unmotivated fear as the theater is really one of the safest places. The title of the comedy, ‘Today is already tomorrow’, in this sense does not appear at all casual, in this period, expressing hope for our near future “. , explains the actress, “the work speaks of rebirth: the rebirth of a woman, which can be a metaphor for the rebirth of all of us, of our society. I hope it is a good omen”. In the comedy, the woman in her actual solitude speaks to a wall … “The important thing is to communicate, preferably with a person, but even a wall is fine: it is patient, it is silent, it does not contradict or deny .. . “. In short, it really has many qualities! (By Enzo Bonaiuto)