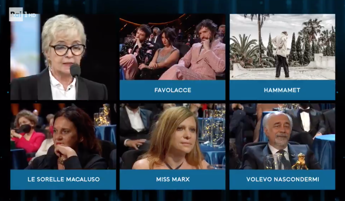 David di Donatello 2021, from Sofia Loren – winner as best actress for the film ‘Life in front of herself’ – to Elio Germano – best actor for ‘Volevo Nascondarmi’ (film also chosen for best director and best film) – here all the protagonists of the 66th edition of the Italian cinema awards, whose ceremony was broadcast on Rai1, conducted by Carlo Conti. To open the evening Laura Pausini who, from the Teatro dell’Opera in Rome, sang ‘Io Sì’, a song awarded at the Golden Globes and nominated for the Oscars, as well as the David as best original song, taken from the film sé ‘by Edoardo Ponti with Sophia Loren. Sophia Loren Sophia Loren is the one to receive the David di Donatello as best leading actress for the film directed by the actress’s son, Edoardo Ponti (VIDEO). She therefore remains the David record holder in the Best Actress category. The 86-year-old actress prevailed over Vittoria Puccini (for ’18 gifts’), Paola Cortellesi (for ‘Figli’), Micaela Ramazzotti (for ‘The most beautiful years’), Alba Rohrwacher (for’ Lacci ‘). “My Madonna, help me”, she said excitedly, reaching the stage arm in arm with her son director while the audience gave her a standing ovation. “It’s hard to believe that the first time I got a David was over 60 years ago. But today it’s like the first time. The joy is the same and the emotion is the same,” he added. To conclude, after thanks to the film team: “Maybe it will be my last film, I don’t know. But after so many films I still want to make a better one. Because I can’t live without cinema.” Elio Germano Elio Germano wins the David di Donatello for Best Actor in the role of Antonio Ligabue for ‘Volevo Nascondermi’. “I wanted to thank all those who helped me build this character”, said the actor who dedicated the award “to all the workers of the show business, especially the forgotten ones”. Giorgio Rights and his ‘I wanted to hide’ Giorgio Rights is the winner of the David di Donatello for best director for the film ‘Volevo nascarmi’, dedicated to the story of Antono Ligabue. “A man on the margins of society for many but a man with a lot of will to express himself and a great artist,” said the director receiving the David statuette. ‘I wanted to hide myself’ won the 2021 David di Donatello for best film. The winning film prevailed over the other four nominated films: ‘Favolacce’ directed by Fabio and Damiano D’Innocenzo; ‘Hammamet’ directed by Gianni Amelio; ‘Le sorelle Macaluso’ directed by Emma Dante; ‘Miss Marx’ directed by Susanna Nicchiarelli. “Long live the cinema – said Giorgio Rights – all the other finalists were great films, even directed by young directors and this bodes well. Let’s remember Ligabue even when we meet a homeless man who draws a Madonna. Let’s remember the value of every man and defend him. as long as we can, anyway “. Pietro Castellitto Pietro Castellitto is the winner of the David di Donatello for the best new recorder for ‘I Predatori’. “The prizes are pleasing and the defeats make you create. A kiss to mom and a hug to dad”, said the actor and director, also starring this year in ‘Volevo died prima’ in the role of Francesco Totti. Matilda De Angelis Matilda De Angelis is the winner of the 2021 David di Donatello for Best Supporting Actress for ‘The Incredible Story of the Isle of Roses’. This was announced by Carlo Conti live on Rai1. “Excited and happy”, the actress received the award thanking the director of the film and the production. Mattia Torre Standing ovation and great emotion during the award ceremony of the David di Donatello at the announcement of the posthumous award for the best original screenplay that went for the film ‘Figli’ to Mattia Torre, the screenwriter and director who died in 2019 at only 47 years of age . His wife Francesca and her young daughter took the stage to receive the prize. And to deliver the speech was the latter, who inherited the irony of the father: “Congratulations to my father who managed to win this award even if he is no longer there”, she said thanking the midwives who give birth to the daughters. “Bravo papa”, he concluded in the emotion of the audience. Checco Zalone “If I knew I came”. With the usual irony, in connection from home with the live broadcast of Rai1, Luca Medici, aka Checco Zalone, welcomed the David to the best original song received for the song ‘Immigrato’, written and sung by Zalone himself for the column of the film ‘Tolo Tolo’. Fabrizio Bentivoglio Fabrizio Bentivoglio is the winner of the 2021 David di Donatello for Best Supporting Actor for the film ‘The Incredible Story of the Isle of Roses’. Monica Bellucci “I dedicate this award to my little girls, Deva and Leonie”. So Monica Bellucci, in connection with the David di Donatello ceremony, welcomed her Special David. “With the hope – added the actress – that art in all its forms can find new life”. Gigi Proietti The pupil Enrico Brignano wanted to pay homage to maestro Gigi Proietti on the stage of the David di Donatello, dedicating him an ideal prize and triggering the standing ovation of the audience. “A great actor, one who represented his city has carried it under his skin throughout his career, he who has enchanted rivers of people and brought it to the theater,” said Brignano. “Ladies and gentlemen, he is not here tonight but he is there because my prize, our prize, tonight and forever goes to Gigi Proietti”. Sam Mendes The David di Donatello 2021 for best foreign film went to Sam Mendes’ ‘1917’. All winners: the list of prizes from the website of the Italian Cinema Academy.