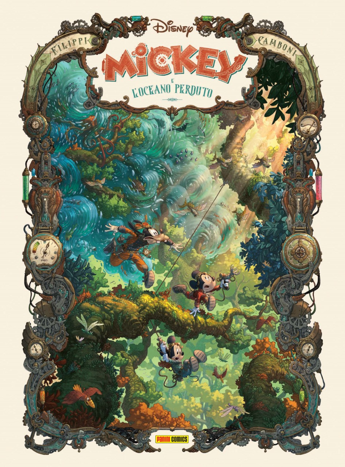 A series of graphic novels arrives, with a series of titles to rediscover the characters signed by Walt Disney: in fact, Panini Comics brings the Disney graphic novels published in France by Glenat for the French market to newsstands, in comic shops and on Panini.it . To kick off the publications, out on Thursday, will be ‘Mickey and the Lost Ocean’, an author’s proof by Denis-Pierre Filippi with drawings by Silvio Camboni and colors by Gaspard Yvan and Jessica Bodart, a ‘concentrate’ of adventure, action, humor and poetry in graphic novel style. ‘Mickey and the Lost Ocean’ opens with a world finally at peace after years of conflict, in which Mickey, Minnie and Pippo dedicate themselves to the recovery of precious technological wrecks, challenging the competition of Pietro Gambadilegno. After responding to an announcement, the three friends get their hands on a strange cube located in the depths of the ocean but do not imagine the true intentions of their patron or the extent of the powers of this artifact, at first sight harmless but capable of subverting the existence of everyone. “If Denis-Pierre Filippi has wisely dosed a mix of ironic and light moments to scenes richer in pathos and suspense, it is due to the talent of Silvio Camboni the graphic realization of that imaginative ‘steampunk’ reality that is the setting for the whole adventure – underlines the editor’s note – To close the volume, in addition, a rich section that collects sketches, sketches and other precious unpublished materials by Camboni, commented by the author “. the Italian edition of ‘Mickey and the Lost Ocean’, a very important book for me, makes me very happy; which then published by Panini, the publisher of Mickey Mouse, makes everything even more enjoyable and closes in a few minutes I hear the circle around my various professional souls “. ‘Mickey and the Lost Ocean’ is the first title in the Panini Comics series that will bring graphic novels signed by great authors to Italy with Disney characters inserted in new and alternative ways compared to how they have always been represented. The next appointment in the series will be with ‘Mickey through the Centuries’ by Fabrizio Petrossi and Dab’s, available in June. Alex Bertani, director of ‘Topolino’ observes: “It is never easy to confront and work with heroes told in decades of stories, often of great value and quality; characters who have acquired such a marked depth and identity that they sometimes become true icons of our time. The strong idea of ​​this series is the will and the effort to get out of a more classic representation and traditional, to try to explore new atmospheres and new territories: we are proud to propose this publishing initiative to the Italian public “. (by Enzo Bonaiuto)