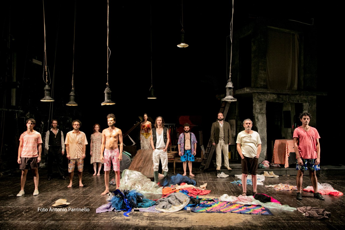 Debut on 10 June for ‘The new colony’ by Luigi Pirandello at the Palazzo della Cultura in Catania, produced by the Teatro Stabile Etneo, where the sets and costumes by Claudia Gambadoro will be on the bill until 20 June, directed by Simone Luglio, the original music by Salvatore Seminatore and a cast of actors under 35 composed of Dario Aita, Antonio Alveario, Giovanni Arezzo, Lucia Cammalleri, Michele Carvello, Roberta Catanese, Antonino Cicero Santalena, Federico Fiorenza, Simone Luglio, Giulio Della Monica, Claudio Zappalà . “When the project for Pirandello’s ‘La nuova colonia’ was born at the end of 2019, I never thought I’d find myself staging a show that is at the same time a space for experimentation, a video documentary and a live streaming – explains the director Simone Luglio – When I give birth to a show idea, I think mainly of a text that somehow speaks to me: in this specific case, I also strongly thought of the author, who was born a few kilometers from where I grew up and who gives always made me feel at home, but at the same time it turns out to be a difficult obstacle to climb. Pirandello is not only one of the greatest playwrights of all time but he is a way of doing theater, a recurring sound, he has the recognizability that great rock stars … “. As for the choice of the work,” it is one of the least Pirandellian texts of his long production, in terms of structure and themes it resembles a Shakespeare, with very strong ties to ‘The Tempest’ – he observes again the director – Here we tell of the madness or desperation necessary to make the decision to give up everything and leave for a desert island that they say will one day disappear swallowed by the waters. The season of Pirandello myths is that of the last part of his life and what Pirandello puts in ‘The new colony’ is all his disappointment towards society and in the man who is its advocate “. the relevance of the pandemic for Covid and the distances that have ensued in social relations is immediate. “Especially after having personally experienced the experience of this isolation to which all humanity was forced – confirms Simone Luglio – see the job category to which I belong sink under the blows of violent indifference, how could I fail to consider that those desperate people who play everything out must be a positive and not a negative example in their attempt to want to change their condition, in not to surrender to the Leopard’s motto of changing everything so that nothing changes? “. (by Enzo Bonaiuto)

Sanremo 2022, from McCartney to Carrà: the covers revealed