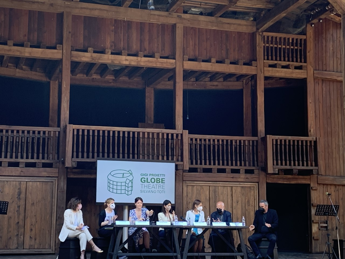 Always in the name of William Shakespeare, but with the new name named after Gigi Proietti, his founder and artistic director until his recent death: the Globe Theater reopens in Villa Borghese, renamed – “from today and forever” as the mayor officially announced of Rome, Virginia Raggi, speaking at the illustration of the billboard – ‘Gigi Proietti Globe Theater Silvano Toti’. The season – which will in any case bring the signature of Gigi Proietti as artistic director, being the ideal continuation of the three-year programming that started last year, despite the difficulties caused by the pandemic for Covid – will be longer than usual, opening on June 30 to close only on October 10th. Carlotta Proietti, daughter of the great Roman actor and director, also present with her sister Susanna, underlined the importance of “carrying on the Globe’s business even in such a complex year”. “For us it is a great gesture of generosity that the ‘Silvano Toti Globe Theater’ will now be called with the name of our father: we dedicate this season to him, in the place that he taught us to make the most of our potential”. Observes the actress: “The public has shown a great desire to return to the theater and we feel the responsibility of proposing a rich season, thanks to the collaboration of the Teatro di Roma, in a fundamental place for the life of the city, safe and healthy. This is also an act of courage because culture, art, music, theater must be defended at all costs, as a sign of hope and life “. Bevilacqua and Barberio Corsetti to represent the Theater of Rome. from Rome, Emanuele Bevilacqua, said he was “moved to return to the Globe, after the last time for the tribute to Gigi Proietti. Quality programming for a large and popular audience is the right balance to seek. The theaters , especially the public ones, are reopening while for the private ones it seems more difficult: but it is important that there are as many reopenings as possible, even for a younger audience “. For the artistic consultant of the Teatro di Roma, Giorgio Barberio Corsetti,” for the rebirth of the theater the bells should be rung in celebration, like at Easter! Each reopening of the hall is an appeal to hope and the ability of art to speak to people. In the cultural and artistic heritage to be defended in our country there is also the heritage of art and live entertainment, also an ‘ecosystem’ to be protected and supported “. As for the billboard, obviously all in the name of the repertoire of William Shakespeare, it starts on June 30 with ‘Romeo and Juliet’ directed by Gigi Proietti, to continue from July 28 with ‘The twelfth night’, from August 10 with ‘A midsummer night’s dream’, from 19 August with ‘Measure by measure’, from September 17th with ‘Falstaff and the Merry Wives of Windor’, from October 7th with the show ‘Love’s pains lost’. (by Enzo Bonaiuto)