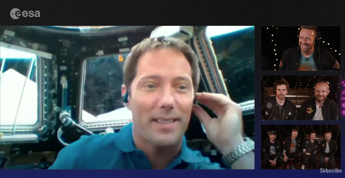 Coldplay’s new single comes from space. ‘Higher Power’ – released today – was in fact ‘launched’ in connection with ESA astronaut Thomas Pesquet, during the Alpha Mission. To celebrate the release of the new single, the caption on the European Space Agency’s YouTube page reads, the British band “connected for an extraterrestrial video chat with French ESA astronaut Thomas Pesquet, who is currently engaged in a six-month mission aboard the International Space Station “. “A specially recorded performance of ‘Higher Power’ – with dancing alien holograms – was transmitted to Thomas, who gave the track its first replay aboard the Station.” A space premiere.