Gambling addiction at the center of ‘Slot’, with Quattrini and Barale at the Manzoni theater in Rome 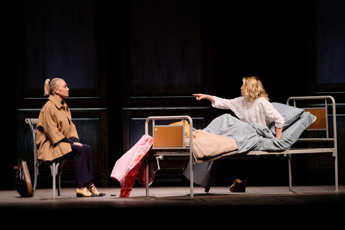 The comedy ‘Slot’ written and directed by Luca De Bei, which sees protagonists on the stage of the Manzoni theater in Rome until 14 November Paola Quattrini and Paola Barale, respectively in the role of divorced wife and new partner of the same man, with the son of the first to try laboriously but not in vain to act as a hinge before the vortex swallows everything and everyone. Slot, that is the power of the game, seduces and promises a different and obviously better life, attracting above all those who cannot accept their loneliness, the time that passes with their wrinkles, the crisis of family relationships and friendships. The protagonist falls into the trap, convinced as often happens in such situations that she can dominate her desire to play, thus losing savings, energy and affections. “The show – explains the author and director – is conceived as a light dance that begins with cheerful and persuasive notes, just as the game appears at first to those who approach it; to become gradually more and more enveloping, tighter; and finally transform into a vortex of energy from which it will seem impossible to escape. It is called ludopathy: but only the name is playful. When the monster takes possession of its victims, getting out of its coils is very difficult “. (by Enzo Bonaiuto)

Almudena Grandes died at the age of 61, wrote ‘The ages of Lulu’

Joséphine Baker, Paris dedicates the metro stop to her

In Ancona he opens ‘Terra Sacra’, art reflects on life after the earthquake

One thought on “Gambling addiction at the center of ‘Slot’, with Quattrini and Barale at the Manzoni theater in Rome”