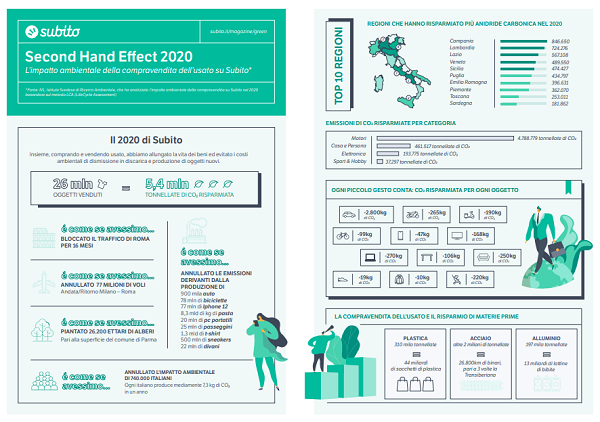 Used is good for the environment. Buying a second-hand item means extending its life, lightening landfills and helping to consume fewer resources to produce a new one. And by doing so, the CO2 emissions associated with the production and disposal process of an asset are eliminated. A form of circular economy that leads to economic and environmental savings, quantifiable with the Lca (Life Cycle Assessment) method. According to the Second Hand Effect 2020 research, conducted by the Swedish Institute of Environmental Research Per Subito, and released in view of World Environment Day, 5.4 million were saved in 2020 thanks to the sale of almost 26 million items on Subito. tons of CO2, equal to the total carbon dioxide emissions that 26,200 hectares of forest would absorb in a year, more than the surface of the municipality of Parma. The Second Hand Effect 2020 research, in its sixth edition, has calculated the environmental impact, that is, the savings in terms of CO2 emissions and raw materials, resulting from the sale of used vehicles on Subito. And what does the saving of 5.4 million tons of CO2 correspond to: it means eliminating the environmental impact of almost 740,000 Italians in a year, comparable to just under the population of the province of Lecce. According to the research, in fact, the average environmental footprint of an Italian citizen is 7.3 tons of CO2 per year. If we think instead of the air pollution of our cities, avoiding the emission of 5.4 million tons of carbon dioxide would be like completely stopping Rome’s traffic for 16 months or even canceling 77 million return flights between Milan and Rome. . “Whenever you choose to buy a used item instead of something new, whether it’s a piece of furniture, a smartphone or a pair of jeans, you’re not only saving money, you’re also making a choice that helps the environment – comments Giuseppe Pasceri, CEO of Subito – Second hand is a daily habit for over 23 million Italians, which gives objects a second life and which generates a concrete and quantifiable impact on the well-being of our planet. The 5.4 million tons of CO2 saved in 2020 are thanks to the users of Subito and their 26 million ‘small gestures’ with which they have chosen a participatory and sustainable economy, fighting climate change. Just think that together it is as if we had planted a forest as big as the Municipality of Parma ”.Among the categories that generate a greater ‘second hand effect’ is that of engines, which allowed the savings of 4,788,779 tons of CO2 in 2020. The products and furnishings of the home and personal world follow in second place with the they saved 461,517 tons of CO2. The podium is completed by electronics, which led to a saving of 193,775 tons of CO2, followed by sports and hobbies with 37,297 tons of CO2. As regards individual objects, the one with the greatest environmental weight is the car, equal to 2.800kg of CO2. The motorcycles (265kg of CO2) and the scooter (190kg of CO2) follow among the engines. But even simpler objects can contribute to reducing our environmental footprint: a used PC saves 270kg of CO2, a television 168 and a smartphone 47. A bicycle corresponds to 99kg of CO2. Finally, even choosing second-hand clothing contributes to the environment: just think that a sweatshirt “weighs” 10kg of CO2 and a pair of shoes well 19kg.By buying and selling second-hand, not only carbon dioxide emissions are avoided but also the extraction and use of raw materials to produce new goods. It is estimated that in 2020 the sale on Subito saved over 2 million tons of steel, which corresponds for example to 26,800km of tracks, like 3 times the length of the Trans-Siberian. Or 197 thousand tons of aluminum, like not having produced 13 billion cans of soft drinks and finally 310 thousand tons of plastic, like having saved the production of 44 billion plastic bags or 5.8 billion 2lt plastic bottles. Campania is confirmed again this year as the most virtuous region, placing itself in first place with 846,650 tons of CO2 saved. The second place is also confirmed year on year with Lombardy and its 724,276 tons, followed by Lazio with 567,108 tons saved. The top 5 is closed by Veneto with 489,550 tons and Sicily, which records 474,427 of CO2 saved.To tell users about the impact of their sales and the sustainability of the second hand economy, Subito has also created a Green section within Subito Magazine and a video made with Valerio Lundini.

1 thought on “Environment Day, used items help save the planet”