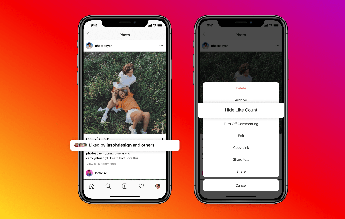 It all started from a thumbs up, the basic button to show appreciation for content posted on Zuckerberg’s creature. Over the years, entire currents of thought have polarized around that “like”, highlighting its influence on individual perception and self-image, since the like provides a simple, fast and quantifiable measure of the approval of others, and it does so uniquely: on / off, like or not like. Likes are also monetizable to some extent. Together with the number of followers and interactions, they help the algorithm that governs social networks to choose the most interesting contents, in a cause-effect circuit that is self-fulfilling, that is, simplifying: I have many likes, so my post is interesting, and the algorithm proposes it to more people who will put the like in turn. Popular posts and accounts, both on Facebook and Instagram, are obviously more appealing to business partners, and that’s where the scramble for influencer status passes. At some point, however (in mid-2019) the likes of Instagram disappeared. Only the author of the content could see the number of “hearts” received. This while Facebook instead decided to diversify, introducing various possible reactions to the same post: the classic thumbs up, but also heart, laughter, amazement, anger, tears, in an attempt to make the interaction less aseptic. In 2020, at the height of the pandemic, the hug also came to symbolize a closeness that was not physically granted.The move to hide the number of likes has put the market of influencers on Instagram in crisis, suddenly deprived of a visible counter of their success. They needed those numbers clearly to communicate the monetary value of the content posted, showing the engagement rate. Some of the effects have been there: the physiognomy of the business profiles has changed, and the micro and nano influencers with quality content have benefited from it, instead of the handful of VIPs that catalyzed all the attention of the brands. The reactions, however, have been strong both for good and for bad, and now Instagram and Facebook are ready to revolutionize the world (and the market) of likes again. allows you to hide or keep the number of likes visible, both on Instagram and on Facebook, according to your preferences. They explain from the company: “You may have noticed that we hid the counts to see if it could bring less pressure to people’s experience on Instagram. What we’ve heard, from people and experts alike, is that not seeing the counts is beneficial for some and annoying for others, especially as people use the counts to get an idea of ​​what’s trending or popular. Therefore, we offer you the possibility to choose ”.

1 thought on “Dietrofront, likes on Instagram and Fb count again”