Skin and work of art separate: they are the NFTs of tattoos 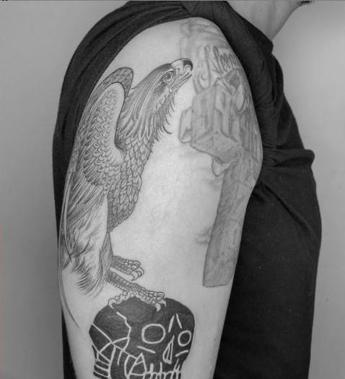 Passion for tattoos and fear of needles from now on can be compatible. Getting an exclusive design by one of the most popular tattoo artists frees you from the need to have it imprinted on your skin, thanks to a new digital space, where tattoos can be bought and sold in the form of NFTs. A marketplace, which takes the name of All Our Best, launched in recent days thanks to the initiative of a handful of tattoo artists headed by Scott Campbell, who in his portfolio boasts works “exhibited” on the skin of Robert Downey Jr., Jennifer Aniston and Marc Jacobs. At All Our Best, tattoo artists can offer their designs in the form of traceable, permanent and exchangeable NFTs – which is impossible once the design has been tattooed. All Our Best becomes the place where the tattoo artist sells his work as an NFT. The buyer of the token therefore has the ownership of an authenticated and unique work, which is accompanied by the right to have it tattooed by the artist himself – not a small detail, given that the most famous tattoo artists have waiting lists of even years. And theoretically there is also the possibility of buying the digital work and having it tattooed by a different artist without violating the intellectual property of the design. But – and here is the little revolution – buying NFT does not mean buying a tattoo. You can also decide to keep only the ownership of the token without bringing the marks on the skin, and resell it if necessary. Or again: having the physical tattoo and reselling the NFT. In these cases, thanks to the blockchain that tracks the exchanges, 10% of the transaction automatically goes to the artist as royalties. There are currently 6 tattoo artists on the platform, which however plans to open up to others as well, becoming a global marketplace. It is not the first initiative but it is perhaps the one with the most entrepreneurial breath. The first round of NFT on All Our Best will have prices between 1000 and 10 thousand dollars, and in addition to the artists, it also benefits customers. The NFT makes the tattoo, a work as fleeting and deadly as its host, an exchangeable and passable good, which does not suffer from the signs of aging and does not fade with exposure to the sun. And still other possibilities open up. Celebrities might decide to sell portions of their tattooed skin as NFTs, just as the few still alive who have the ink of an original Sailor Jerry or other legendary artist on them would have the opportunity to monetize the capital they wear – in less gory ways than the physical preservation of the inked skin flap. Yes, because there are companies like Save My Ink Forever, which remove tattoos after death and transform embalmed skin with special techniques into souvenir paintings, equipped with anti-UV glass to preserve the colors. even further. The Italian Alessandro Capozzi, for example, has started a partnership with Tatwiggle, a collective of designers who animates tattoos by creating short films starting from drawings on the skin. The first piece of digital art, authenticated in the form of an NFT, is a tattoo accompanied by its animation, which the tattoo artist made for and on dance pop star Demi Lovato. Capozzi, known for his hyper realistic and accurate drawings even in the smallest dimensions, will thus allow his customers to purchase the drawing, the connected animated digital work, and then decide whether to actually have it tattooed on them.

Moncler pays no ransom after hacker attack, data released on the dark web

Orlando in pressing on minimum wages and representation, dialogue but no stop

One thought on “Skin and work of art separate: they are the NFTs of tattoos”