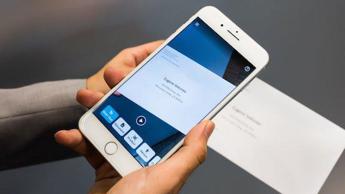 3% of the world population is affected by visual impairments, over 250 million people, about 2 million in Italy. Technologies such as the Israeli My Eye can lend a concrete hand. The camera attaches to glasses and supports blind or visually impaired people in daily life. Annalisa Minetti, who showed the small device live on Sunday Live, interviewed by Barbara D’Urso, brought her to the fore of the media. But it is already on the market at the price of 4500 euros excluding VAT: thanks to an artificial intelligence software it frames in real time what the person’s eyes cannot see, and then translates it into words that are directly “whispered” into the ear of those who wears it. It can memorize up to 100 faces, 200 daily objects, recognizes colors, and to make the experience even more natural it responds to gestural commands: rotate and look at the wrist as if reading the watch makes the device tell us the time and the date, pointing or picking up an object makes it frame and recognize it, following with the finger a written text makes it read, and just mime the stop to interrupt or pause the reading. A support that could be of help not only for the blind and visually impaired, but also for those with dyslexia problems. Devices of this kind can really change your life, even if the costs, albeit partially reimbursed in Italy by the national health service, are high and for many prohibitive. However, the computer vision technology behind the MyEye camera is not reserved for a few. There are entirely free apps that do a very similar job. The most technologically related is Seeing Ai. The surrounding environment is framed with the smartphone camera, and information is obtained that is read by a voice (also available in Italian). Developed by Microsoft, this app has the same functions as the OrCam’s smart camera. Reads a text “on the fly” (for example a road sign or a sign), acquires and reads entire pages or documents, recognizes and describes people’s faces, recognizes colors and their shades, has a “evaluate” function for indicate the different denominations of coins and banknotes, photographs and describes scenes and landscapes, detects and signals the level of light in the environment with a beep of varying intensity, frames and reads the bar codes of the products. A virtual assistant that, even if the convenience of the device at eye level is lost and a little naturalness is lost, does not have much to envy to the functions of MyEye, with the advantage of cost. blind people have a good amount of apps available to help them in their daily life. Both IOS with VoiceOver and Android with TalkBack have for some time already had integrated accessibility settings for the blind, which allow users with vision problems to hear what is displayed on the screen of their device, and respond and interact with voice commands. Many apps such as Digit-Eyes and Audio Labels (paid, for iPhone) and Item Identifier (free, Android) read barcodes and QR codes and decrypt them into audio. But even the same virtual assistant apps such as Siri and the Google assistant integrate voice commands to send emails, make phone calls, search the web, start applications, play music. Light Detector makes the light “feel”: by acquiring information about the surrounding environment through the camera, the app emits a more or less high-pitched sound in relation to the amount of light detected. Useful, for example, to understand if the house lights are on or off or if the shutters are raised. EValues, on the other hand, allows you to read the newspapers present in the service, it works through compulsory registration and presentation of the certificate of disability to the Scientific Research Center of the UICI (Italian Union of the Blind and Visually Impaired). Then there are specific apps for the visually impaired that improve the readability of texts and images by enlarging them without losing definition or increasing the contrast, others that read messages, documents, web pages, pdf files, dictation programs aloud (even in addition to those already integrated into the latest operating systems). And again: GPS apps that integrate audio information on the surrounding environment or allow you to “visit” it in advance, preparing for what you will find, or others such as MovieReading and CineAudioteca that add an audio description to the films.

Bper Banca signs a memorandum of understanding with Anaci

Covid, Francis Ford Coppola’s resort: “With Omicron, reservations are slowing down but no cancellations”