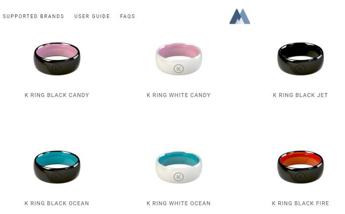 According to the Innovative Payments Observatory of the School of Management of the Politecnico di Milano, while consumption in the last year has fallen by 13%, digital payments have risen from 29% to 33% of total payments. Contactless payments increased above all, marking a + 29%, reaching the share of 81.5 billion euros and, even more, those via smartphones and wearables (+ 80%, over 3.4 billion). Wearable payments are still a small reality but show the highest growth rate. According to an Allied Market Research report, the global wearable payments market took on a value of $ 285.47 billion in 2019 and aims to reach $ 1.37 billion by 2027. Under these perspectives, technologies like that are becoming a reality. of Digiseq that marks a turning point in the wearable device sector through a mobile app capable of transforming any object, through an NFC chip, into a contactless payment device. The Manage Mii mobile app allows consumers quick customization to equip any supported item, from shirt cuffs to jewelry, watches to rings, tools with contactless payment functionality with a simple touch of the phone. In essence, users can pair their credit card with the wearable device, monitor activity, change the bank details paired with the wearable device, and with an intervention on the phone app, even disable the payment functions. Banks currently supporting the initiative include ABN Amro, Cembra Money Bank, Credit Bank of Moscow, Gazprombank, KBC Bank Ireland, KBC Bank Verzekring Holding, Nordea Bank, Rabobank, Raiffeisen, Russian Agricultural Bank and Swedbank. Nordea, for example, offers K Ring to its customers by linking the ring directly to their cards. IK Ring linked to Nordea cards work wherever contactless Mastercard payments are accepted. David Birch, recently appointed non-executive chairman of Digiseq, says: “This week Colin Tanner and I filmed a live transaction where I used my Alioth Pay ring with Mastercard using my iPhone 12. I am delighted that together we are making wearable devices a reality for the mass market. ”Consumer confidence still remains to be strengthened around the delicate issue of data privacy. In a recent interview, the President of the Guarantor for the protection of personal data Pasquale Stanzione explained: “The apparent harmlessness of everyday objects connected to the network leads us to underestimate the risks, due to the ability to reveal, through secondary use of collected data, lifestyles, pathologies, vulnerabilities, even addictions. And it is precisely health data, if improperly acquired, that can expose the data subject to unacceptable forms of discrimination. Some smart watches suitable for biometric detection (for example for the speed of the step) can then reveal the user’s emotional reactions to the vision of certain images. The control to which we expose ourselves can therefore overcome even the corporeal dimension and draw on thought, condemning us to real voluntary servitude ”.

1 thought on “Pay without lifting a finger: the ring that paves the way for contactless”