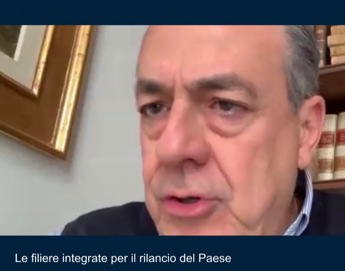 A crucial issue in Europe in the Farm to Fork strategy is how consumers should be informed when choosing food: “Should they be helped to choose or should they be conditioned because they are unable to make a choice on their own? The underlying philosophy is that we are for the food culture of the Mediterranean diet and we want the distinctiveness of the products linked to the territory to express characteristics that the consumer then chooses independently “. This is what Paolo De Castro, member of the Agriculture and Rural Development Commission of the European Parliament said, speaking at the workshop “Integrated supply chains for the relaunch of the country” which is part of the “Integrated supply chains” initiative that The European House – Ambrosetti launched with the support of Philip Morris Italia, in which, among others, the undersecretary for agricultural policies Gian Marco Centinaio and the president of the Umbria Region Donatella Tesei participated. Read also “We believe that the consumer must be informed and then he will make his choices that is why the historic battle over origin labeling – he said – has finally reached a turning point in the Farm to Fork strategy there is also this important step forward: to clearly indicate the origin of food products “. Therefore, for De Castro, the distinctive element and transparency must be at the basis of the consumer’s choices. This was underlined by reiterating the Italian “battle” at Nutriscore, the traffic light label, “which excludes from choice and conditions consumer behavior with colors”. It is “a huge issue concerning food security that will be discussed at the United Nations summit in New York in September”, concluded De Castro.