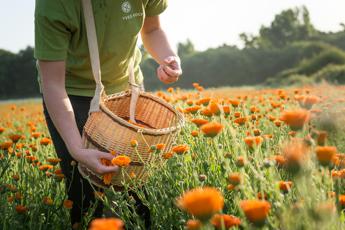 The Italian branch of Yves Rocher has become a benefit company, changing its corporate name: from this moment on, the general purpose of the company is no longer just that of pursuing economic growth, but also of common benefit purposes. Italy, with more than 800 benefit companies, is the first country in Europe to have officially legalized this status since 2016: the transformation is not only on paper, but authentic and concrete, as every year the benefit companies are recalled by law to report on the impacts generated and on the objectives set for the previous year. The commitment to the planet is part of the DNA of the Roche Group which in 2019 was the first international group to formally and legally adopt the status of ‘mission-driven company’ according to French law: starting from the belief that nature has a positive impact on people’s well-being, the new raison d’être of the Rocher Group has become to reconnect its communities to nature – Reconnect people to Nature. On the wave of the ambitious path taken by the Rocher Group, Yves Rocher Italia also decided to start the same path, identifying 4 purposes of common benefit to be included in the company statute and therefore officially representative of its mission, which will be followed by concrete actions, included in a roadmap that will guide corporate commitments during 2021. “Yves Rocher Italia – Benoit Ponte, general manager of Yves Rocher Italia told Adnkronos – is the spokesperson for the message that the whole Rocher Group shares globally: the the common good is our priority and therefore our goal is not to be the best company on the planet, but the best company for the planet. For over 60 years we have been defending a committed, natural and responsible beauty, like the one imagined by our founder , Monsieur Yves Rocher. The Rocher Group recognizes itself in its commitment to preserve biodiversity and the protection of natural resources, as well as La Gacilly, land of origin of the Brand, which in over 250 certified supply chains all over the world. Social and environmental responsibility has been part of the Rocher Group’s DNA, since its origins. “And he continues:” The values ​​and wealth that characterize our history invest us with the duty to act for a world that is fairer and more respectful of people and of the gifts that nature offers us. In 2019, the Rocher Group was the first international group to have adopted the status of ‘mission-driven Company’ introduced by French law, known as Loi Pacte, aiming at the common good and that of the Planet “. Today, continues Ponte, “Yves Rocher Italia follows in the footsteps of the parent company and formalizes its transition to a benefit company. A benefit company carries within itself the dual purpose of generating a positive impact not only for shareholders but also for all stakeholders. This commitment is now formally spelled out in our statute, which states the areas in which we will strive to generate a positive impact in the following years. The transformation is not only on paper, but authentic and concrete, as every year the benefit companies are required by law to report on the impacts generated and on the objectives they had set for themselves the previous year. We want to share, in this publication, how we will concretely act to translate the values ​​of the Group and the brand locally. “Then he concludes:” After a thorough analysis of our actions, we have identified four specific areas of intervention that will become the compass to guide our strategic choices in the coming years, not only from an economic point of view but also taking into account as a priority the impacts we generate on the environment, on people and on the communities with which we interact on a daily basis. Through a democratic process that involved all employees, we have selected a series of initiatives that we will implement in 2021 and that we expect will bring us closer to the established goals. With the choice of becoming a benefit company, we have started a commitment and an even more active participation in the territory in order to be protagonists in Italy of a real change and, on a global level, alongside all those companies that like us intend to contribute to a true paradigm evolution “. One of the initiatives that mark the 2021 roadmap is Plant For Life, a worldwide planting project promoted by the Yves Rocher Foundation and created with the aim of regenerating the soil, slowing down desertification and reconnecting people to positive energy of nature, which also sees Italy as the protagonist with the planting of 10,000 trees between Veneto and Lazio. During 2021, initiatives by the purchasing department are also planned to reduce environmental impacts in distribution processes, with feasibility analyzes for creation of Pudo (Single Points of Organized Distribution) and unification of pallets for logistics hubs objectives also include activating training sessions to sensitize the company population to environmental and social issues and offer volunteer opportunities to local communities. Furthermore, the company intends to focus its attention on the social selling channel, which offers job opportunities in which professional success can find the right balance with the needs of personal life, giving voice to the more than 200,000 beauty consultants present in the area.