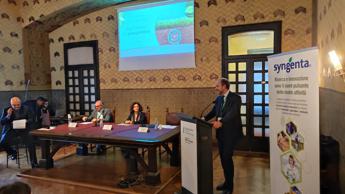 On the occasion of the sixth edition of the Mantova Food & Science Festival, the scientific dissemination review of national and international importance, Syngenta, partner of the event, organized the meeting ‘Agriculture in perspective’, an opportunity for discussion and in-depth analysis of the new CAP, the common agricultural policy. In an increasingly challenging historical moment for agriculture, the event stems from Syngenta’s desire to analyze, with national and European experts, the possible scenarios that the agricultural sector will have to face in the framework of the new Common Agricultural Policy, which will come into force from 10 January 2023. And it is precisely from this renewed regulatory context that the analysis presented by Nomisma “Scenarios and Perspectives for the New CAP 2023/27” begins, which analyzed the effects and opportunities of the new regulatory system for some supply chains important aspects of the Made in Italy agri-food sector. “The green challenge launched by the Farm to Fork and accepted by the CAP starting next January 2023, although shared in its objectives, is now facing a complex and rapidly evolving geopolitical and economic situation – said Ersilia Di Tullio, Senior Project Manager of Nomisma, commenting on the results of the analysis – A careful evaluation of the effects of these choices and of the the real possibility of Italian agricultural enterprises to meet new stringent commitments, especially in sectors already in crisis, such as maize and pear, which in the last ten years have lost respectively 38% and 20% of the surfaces “. from this analysis, the debate then focused on climate change, on the issue of food security and on the profound interdependence that, in an increasingly connected world, binds all sectors and all markets. Farm To Fork, crop protection products, integrated agriculture and the centrality of the Made in Italy supply chains were, among others, the topics touched upon. “Analyzing the impact of food plans and policies designed at European level is fundamental today – he commented on the sidelines of the event Riccardo Vanelli, CEO of Syngenta Italia – In the coming years, climate change and population growth will place the international agri-food chain in front of a complex challenge: guaranteeing food security on a global scale while preserving the environment. It is necessary to focus on research, technology and innovation so that we can guarantee competitiveness to Italian farms and make available to farmers tools that go in the direction of supporting the indications contained in the new CAP, while protecting yields and sustainability in the field “. “In building the new agricultural model, as a national association of farmers we have set ourselves objectives and priorities: to increase productive and competitive capacity by making courageous and concrete choices. You cannot work only with slogans, but also and above all with facts ”, declared Massimiliano Giansanti, President of Confagricoltura, invited to take part in the discussion. The debate was also attended by Paolo De Castro, European Parliamentarian, Giuseppe Blasi, Head of the European and International Policies Department of the Italian Ministry of Agricultural, Food and Forestry Policies, Teresa Maria Iolanda Schipani, Head of the Planning, Territorial Development and Sustainability Sector of the productions of the Emilia-Romagna Region, Andrea Massari, Director General of Agriculture of the Lombardy Region, Giulio Gavino Usai, Head of the Economic Area of ​​Assalzoo, and Mauro Coatti, Head of Technical Support of Syngenta Italia.