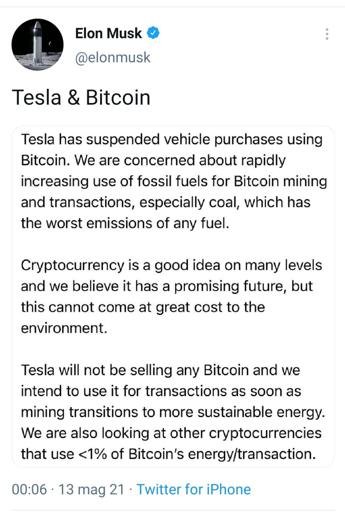 We are concerned about the rapid increase in fossil fuel consumption in mining and bitcoin transactions, especially coal, the worst. Maximum trust in cryptocurrencies but this cannot be to the detriment of the environment. Tesla will not sell its Bitcoins but will focus on other cryptocurrencies that use less than 1% of the energy that bitcoin uses for its operations. More or less this is the gist of the tweet, which arrived in the heart of the Italian night, with which Elon Musk announces Tesla’s disengagement from Bitcoin. By midnight, Bitcoin was at $ 54,700. After the tweet, at 1.30 am in Italy, it was at $ 51,500, marking a minus 8%. At two o’clock he looked at 45 thousand dollars and minus 20% in the face, then slowly rose above 50 thousand, still marking a minus 11.5%. Environmental reasons. It has been seen several times in recent weeks how two opposite parties have been generated on this front: the apocalyptic ones which, more or less, can be summarized with the data of the Global Cryptoasset Benchmarking Study of the University of Cambridge which highlights how the bitcoin network you consume 121 TWh a year: if it were a nation it would be among the 30 in the world with the highest consumption. And opponents like the teams of Jack Dorsey, creator of Twitter and Square and Cathie Wood of Ark Invest, who have produced the results of a research collaboration. The target? Demonstrate how bitcoin mining incentives the use of renewable energy. Wood says: “With the convergence of cryptocurrency mining, energy storage and AI technologies, the adoption of renewable energy is likely to accelerate.” In short, the functions of the bitcoin network could act as a single buyer of energy, able to guarantee that the mining and trading of bitcoins rely on clean energy sources. Environmentalist or non-environmentalist Elon Musk (who knows how much they consume). his space rockets), yet another statement that destabilizes the already volatile trend of cryptocurrencies, after the one triggered by the rumors of last April that the administration of Joe Biden is about to propose a capital gain tax of up to 43.4% for the richest who had brought bitcoin under $ 50,000 after a long time. And a move that doesn’t come completely sudden: During the first quarter of 2021, Tesla bought cryptocurrencies worth $ 1.5 billion, then sold them for $ 272 million. On April 26, Tesla said it had a $ 101 million positive impact on profitability from bitcoin sales.