The sex of the chicks is recognized in Ovo 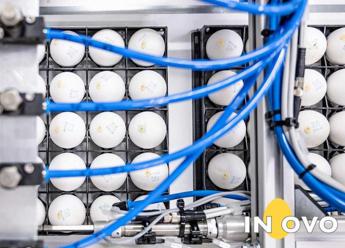 Both eggs and chicken meat are found in cookbooks of nearly every culture, with over 90 million tons of chicken meat and over 70 million tons of eggs being produced annually globally. In Italy, according to Ismea data, egg consumption in 2020 increased by almost 14% in value, reaching 219 eggs per capita. Since the 1950s, the world population has tripled and nutritional needs have changed towards a higher protein diet. The demand for eggs and poultry involves issues to be resolved, related to farms and processing practices. Without forgetting the ethical issues: until recently, it was impossible to know the sex of a hen inside an egg. It was necessary to wait for the eggs to hatch and specific professional figures, the sexers of chicks, separated the males from the females by hand. Even today, an estimated six billion newborn male chicks are killed worldwide each year, according to the U.S. government-funded Foundation for Food & Agriculture Research. Male chicks are useless for hatcheries because they do not lay eggs and do not gain weight as fast as the type of chickens raised for slaughter. A Dutch FinTech, In Ovo, has invented a machine that inserts needles into rows of chicken eggs that run along a conveyor belt, taking a small drop of liquid from each egg before closing the holes in the shells with biodegradable glue. The fluid is immediately analyzed to reveal the sex from the egg by sending the females to the incubator. “In Ovo has identified a new biomarker for gender together with the University of Leiden. Together with the engineering company Demcon, a precise and automated sampling method was developed for small amounts of fluid from the egg. In addition, In Ovo is the first to apply the world’s fastest mass spectrometer, Sciex Echo® MS, outside a laboratory. This combination of state-of-the-art engineering and high-tech biochemistry results in a fully automated inline solution, capable of typing gender eggs on day 9 of development, a solution that can be seamlessly integrated into existing hatcheries. ” has developed a high-throughput screening machine, called Ella, which types the egg instead of the chick. “This gives hatcheries the ability to hatch only females, which is better for the welfare and sustainability of the animals. She is the result of several technological breakthroughs. It can screen both white and brown eggs, at an early stage, with high precision and with high productivity “. In addition, after hatching “The SmartStart ™ feeding system provides day-old chicks with necessary nutrients and sufficient water levels. At the heart of the solution is a moisture-retaining gel that is mixed with a feed that provides the right amount of water to newborn animals. ” The killing of male chicks represents an ethical problem for society, felt by consumers, policy makers, NGOs, retailers and the industry: “To accelerate the adoption of this important technology, the existing shareholders VisVires New Protein and Evonik Venture Capital have financed another round of several million euros ”. The first 150,000 chicks hatched with this technology “are just the beginning, hatcheries using the current Ella system can hatch a million hens a year. As high demand is expected in the coming years, In Ovo is continuously improving its technology in terms of speed, accuracy and days of testing. In a few months, a new Ella machine will be able to hatch five million hens a year and In Ovo will start rolling out its technology outside the Netherlands ”.

Draghi, his future leaves the markets with bated breath

Finance, Italy back on literacy: 12 female entrepreneurs in the chair