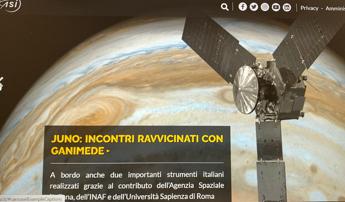 It will be a very close flyby that the NASA probe Juno – in orbit around Jupiter since 2016 – will perform today, at 19.35 Italian time, with Ganymede, one of the many moons of the giant planet. Juno will ‘approach’ flying over Ganymede at an altitude of about 1,000 kilometers. Numerous scientific instruments are placed on board the Juno probe, including two with Italian participation with the support of the Italian Space Agency: the Jiram instrument, made in Italy by Leonardo and led by the National Institute of Astrophysics, and the KaT radioscience instrument. (Ka-band Translator), created by Thales Alenia Space and led by the La Sapienza University of Rome. Juno was launched in August 2011 and is currently studying Jupiter’s magnetic field and atmosphere in an orbit that passes over its poles. The probe has collected an important amount of information so far that NASA, at the beginning of this year, extended the mission until 2025. Jiram, Jovian Infrared Auroral Mapper, is dedicated to Angioletta Coradini, INAF astronomer passed away in 2011 and former Principal Investigator of this instrument. Jiram is a near infrared camera (2-5 microns) capable of collecting both images and spectrograms. The Kat, the other instrument with Italian participation, instead allows the measurement of Jupiter’s gravity through the Doppler effect of a microwave signal. This extension will make Juno an “explorer” of the entire Jupiter system – the planet, the its rings and moons – with multiple close passages, called flybys, planned for the three of Jupiter’s most intriguing Galilean moons: Ganymede, Europa and Io. The satellite encounters therefore begin today with a low-altitude flyby – about 1000 kilometers from the surface – of Ganymede during Juno’s 34th orbit around the giant planet. Asi and Inaf explain that “among other things, these steps will serve to reduce the orbital period of the probe from about 53 days to 43 days”. Among all the objects in the solar system, Ganymede is certainly one of the most interesting according to scientists. It is the largest object without an atmosphere, the largest of all known satellites of the planets, the one with the lowest moment of inertia and the only one known to possess an intrinsic magnetic field which, in turn, is immersed in the most large magnetic field of Jupiter. “Italy and the Italian Space Agency are once again at the forefront in the exploration of our Solar System” underlines Giuseppe Sindoni, ASI project manager for Jiram. “Such accurate measurements and such high spatial resolution will help us to unravel the mysteries of Jupiter and its satellites,” says Sindoni. Alessandro Mura, head of Jiram for INAF, notes that “Jiram’s data will finally be able to reveal how the surface of Ganymede interacts with the external environment, and will be invaluable for planning future observations such as those of the Juice mission currently scheduled for launch. in the next year “. Finally, in two months, Juno will again observe Ganymede from a greater distance, and Jiram, thanks to its ability to acquire high resolution images, will have an additional observation window to complete those started today. Juno will study these characteristics using his tools. The plasma instruments will investigate how charged particles of the Jovian environment circulate and precipitate around the moon, creating a kind of peculiar auroras. The magnetometer will make us understand how the magnetic fields of Ganymede and Jupiter “communicate” with each other. The radiometer will investigate the properties beneath the surface of Ganymede. Finally, the cameras, including the Italian infrared imaging spectrometer Jiram, will provide us with very high resolution images and spectra (up to a few hundred meters) of the moon’s surface.

1 thought on “Space, for Juno a close encounter with the moon of Jupiter”