Jack Dorsey: an open and safe wallet for cryptocurrencies 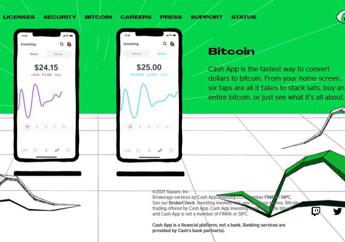 In a recent Tweet, Jack Dorsey, CEO of Square, which specializes in financial and payment services via mobile devices, said: “Square is considering creating a hardware wallet for bitcoin. If we did, we would build it entirely in open technology, from software design to hardware and in collaboration with the community ”. Bitcoin transactions have become a booming business for Square, allowing consumers to make purchases using the Cash app and store the currency digitally. The company’s Bitcoin revenue jumped from $ 516.5 million in 2019 to $ 4.75 billion last year. The company recently reported first quarter profits of $ 39 million, compared to the red of $ 106 million in the same period of the previous year. A performance that was largely driven by the bitcoin transactions that generated 3.5 billion in revenues through the Square Cash App digital wallet. Just a couple of months ago, Square CFO Amrita Ahuja, speaking to CNBC, told how Cash App, Square’s peer-to-peer payment platform, has seen a surge in bitcoin buyers: “We had 3 million people who transacted in bitcoin through Cash App in 2020 and 1 million new bitcoin users in January. ”What Dorsey proposes is a different way for users to store their bitcoins in a secure device that allows them to choose to spend it later. Currently, examples of this type are those relating to PayPal which allows you to buy bitcoins even if, until now, they must remain within the ecosystem: there is no way to send or receive cryptocurrencies to and from wallets, exchanges. or third party custodial services. Although PayPal itself is working to allow the transfer of its digital assets, therefore Bitcoin and other cryptocurrencies, even outside of its own application, so as to be able to keep them on dedicated wallets, Dorsey said that Square may be able to simplify the how people hold bitcoins by creating a kind of assisted self-custody that should make it easier for customers to spend some of the available cryptocurrency funds from their phone while keeping the rest of the money in their wallets. Dorsey said integration with the Cash app is somewhat inevitable but “only part of the solution.”

One thought on “Jack Dorsey: an open and safe wallet for cryptocurrencies”